What a treat to be part of the inaugural GranFondo Niagara Falls in the picturesque Niagara region!

The organizers truly created a top-notch event — well organized, scenic route, and even a free concert!  The roads were closed for cyclists, including the high-traffic Niagara Parkway on a busy Saturday morning. That alone was amazing. Police and volunteers were stationed at every turn and at most intersections. Spectators along the route and homeowners standing with their PJ’s and coffee cheering us on were much appreciated.

The morning started out dark and chilly with only a couple hours of sleep, arriving at Niagara Falls by 5:30am.  At least we got to witness sunrise over the Falls!  It may be early but the turnout was spectacular!  The Start Corral was packed with riders awaiting for the 6:45am start.

It was massive group out of the start, riding on the Niagara Pkwy and enjoying the view.  The pace was 30kph+ yet weirdly comfortable for me.  It was all smooth until 18km when everyone started yelling “slow down” …. except instead of “slow down”, it was an abrupt stop from 30kph to 0kph.  I nearly hit the rider in front, swerving to his left side without hitting the police motorbikes in the opposite direction.  It was a crash up ahead.  A bit shaken up, we carried on after a short second for more smooth riding.

I didn’t end up visiting any rest stops which were quite abundant throughout the course.  It may not be a “race” but I made it one to challenge myself.  At 50km, I lost the big group because most riders stopped at the rest stops and some were too fast.  From here onwards, tagging with a group was on & off – mostly off.

55km provided the 1st hill that made me huff & puff — a warm up for the upcoming Effingham hill.  The Short Hills Provincial Park area at 60km provided some fun winding rollers; however, I was conscious of not draining all my energy for Effingham.  By 70km, that was all I could think of, counting down the distance to the hill.  At 75km, I turned onto Effingham Rd.  My legs quivered a few km’s later at the start of the 2.2km KOM.  I slowed down and changed to the small chainring.  Time was not my focus, survival was.  The last part of KOM was the Effingham hill.  I kept turning the pedal, focusing on the pavement immediately ahead of the wheel.  I may have only looked up once.  It was tough but not as bad as I remembered.  Finally at the top came the joke of the day for many of us ….. a sign that said, “Sharp Turn, Slow Down”.  Sarcasm?  I was a bit choked up for a second with joy and felt a huge relief.  There was no more excuses to reserve energy for the rest of the ride.  The hard part was over.

At 100km was my first pull.  It was initially for one other rider, which later turned into a group.  It didn’t last long.  The group pulled ahead and later disappeared in a rest stop, ditching me to pull another rider until 110km when we met the last long hill of the day.  He disappeared behind me at the top and I was on my own again.

I was in pure suffering mode and wanted the ride to end.  10km to go … 5 ….4… 3 …2 …1 … crossed the finish and was completely drained.  125km done and glad it was over!  My longest ride to-date and results exceeded my expectations too.

Post ride was enjoyable.  We were provided a hot towel to wipe down the face, hot lunch, complimentary alcohol, and a free concert by Barney Bentall and Jim Cuddy.  Marnie McBean, Canadian Olympic rower, was also in the house!  What a beautiful and fun day! 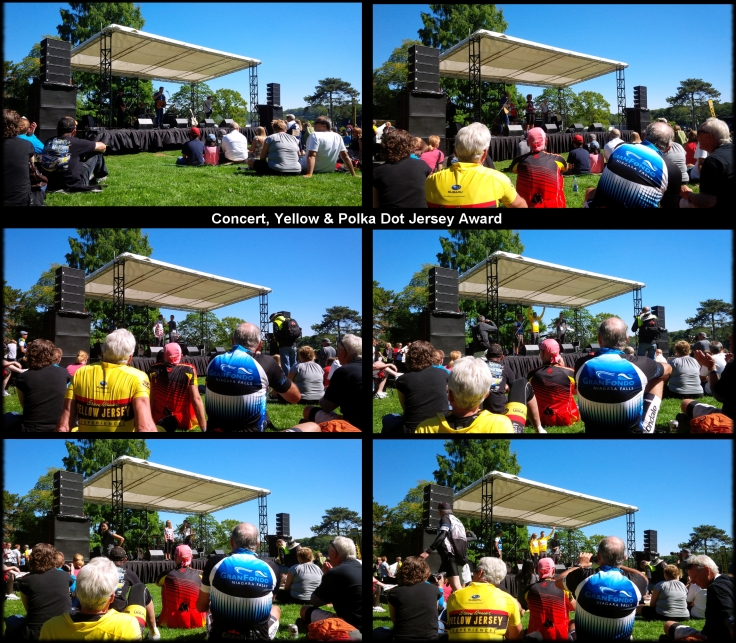 Another big thank you to all those who made this possible.  Marvelous job!