The BEST flippin’ weekend EVER!!!  It was my most anticipated bike tours of all bike tours this year – RONA MS Bike Tour!!  It’s a 2-day tour (Aug 13 – 14) from Acton to Waterloo and back the next day.  It ended up being a grand total of 168km!!  The registration fee included overnight accommodations at the University of Waterloo & all meals.  Not only was this a fun event, it was for an excellent cause (min $250 fundraising). 🙂

After a quick ‘carbo’ breakfast, my bro drove us to the starting line at Prospect Park, Acton.  We had free overnight parking there since my brother was part of a team (I was just a solo 😦 ).  I got checked in, received my bibs, & quickly set up my gears.

Since this was an overnight trip, MS Society transported our luggage to our destinations on both days.  By 8AM, there was a quick opening ceremony, followed by the sawing of the wood by RONA to signal the start of the tour.  😀  The 1st group of cyclists was off at ~8:20AM.  They were letting out ~50 cyclists at a time to prevent congesting the roads too badly.  Waiting way at the back of the line, I was at least the 5th group of riders to leave (I lost count).

What a darn good feeling to be back on the road again!!  😀 It’s been a month since my last tour!  The weather was perfect – not hot, beaming sun, minimum wind.  The road wasn’t as kind – rolling hills yet again! 😮  I have a love-hate relationship with hills.  I love the challenge and they build strength & endurance.  They also bring downhills …. the indescribable feeling of wind blowing in your face & up your back (TMI, I love my wicking jerseys!).  So perfect!  The hate comes in when there are too much of it – struggling up the hills in granny gears is not enjoyable.

This tour had rest stops every 15-20km…..the most frequent I’ve ever experienced.  They provided quite a variety of refreshments: orange slices, bananas, banana chips, plums, water, & Gatorade.  I was obsessed with the plums….so sweet & juicy 😛

As with most bike tours, the route was along countryside – farms, barns, corn fields, trees, ponds.  Just magnificent.

Lunch was stationed at a rest stop 50km into the ride.  It was just shy of 11AM at the time & I wasn’t too hungry.  However, I was told lunch wasn’t served at the finish line.  It was now or never!  I choose NOW!  They served tortillas with deli meat, cucumbers , tomatoes, chips, oranges, & bean salad.

It got cloudier & storm clouds were rolling in as we neared Waterloo.  Uh oh, are those in store for us tomorrow?  😮  By 12PM, I finally arrived at the Ron Eydt Village (residence) at the University of Waterloo with cheers & applause from volunteers.  Being a graduate from UW, it was great to be back & NOT for school purposes!! 😀  Throughout my 5 yrs at UW, I haven’t even been inside this residence!

Day 1 ended up being 82km.  There was an extra loop (additional 21km) for distance seekers that I didn’t do.  My average speed wasn’t too impressive with max speed of 52km/hr.

I gathered my keys to my room, picked up my luggage, & ventured out for all the afternoon activities.  I 1st signed up for a free massage session!  Boy, did that sound perfect.  It was an hour wait (huge waiting list!).  I happened to sit beside Luch……a funny guy who was telling a parrot joke to his buddies beside him (I eavesdropped).  They were part of Team Gears & Tears, consisting of 17 members.  We started talking & joking, eventually got introduced to his team & recruited as one of their “future” members.

I kid you not, we turned out to be dorm neighbours!  What a coincident!! 😀  I later hung out with them at the Beer Garden & at the Corn Roast.  They were so welcoming!  I had a corn on the cob, no beer.  Holy moly, was it yummy.  Sweetest corn ever!!

These guys were just a riot to hang out with…..good laughs, & lots of “is it dinner time yet?”  Turns out they are all squash players & have been doing MS Bike Tours for many years.  Luch has done it for 9 yrs in a row!!!  😯  Luch & I talked each other into doing the “extra loop” together the next day, provided there was no rain (thunderstorm was in the forecast!).  HECK YAH!

Finally, dinner time arrived.  Large menu selections: salmon, chicken, rice pilaf, mixed veggies, pasta, coffee, dessert, fruits.  I was starving.  I ate too fast & suffered the consequences.  Following dinner was the awards ceremony.  Gears & Tears won “Best Dressed” team! 😀  It was still early (~9:45pm).  Luch, John, & I decided to play pool.  They were amazing at it & taught me a trick or 2.  Lights off at 11PM.

Wake up call at 6AM (the ride was scheduled for 7:30AM)!  Breakfast was delicious: yogurt & granola (!!!!), fruit, toast, scrambled eggs, bacon, hash brown, coffee, tea, baked goods, pancakes.  Seriously, were these prepared by UW staff?  I don’t recall having such good food in residence! 😕  Following breakfast was a mad rush…..brought my bike down from my room to the starting line, put on the usual gears, final room check, key drop-off, & filled up my water bottles.

Gears & Tears were lined up at the front of the line (they brought their bikes down 1st thing in the AM).  I wanted to join them since Luch, John, & I planned to bike together today.  I didn’t want to butt, so I got stuck at the back of the line. 😦

While waiting for the start, people around me kept asking where I got my Canadian jersey, helmet, & my bike lights.  They wanted everything!  I was quite flattered! 😳

There was some issue (something with the lunch truck?!) causing a delayed start.  While everyone wandered around wondering what was going on, I spotted the Team Captain (John B) of Gears & Tears!  I quickly went to the front & joined them, while hitting someone’s bike as I positioned mine (She was not impressed! :oops:).  People up front probably wasn’t too thrilled I butted.  Sorry, I didn’t want to bike solo today!! 😦

We were finally off by 8AM.  Ouch, my bum was sore from yesterday!  There were too many cyclists at the beginning to bike together as a group.  However, I met up with Luch & John at the 1st rest stop.

From then on, we were pretty much riding together.  I was drafting behind them most of the time….I’m too skinny to block out the wind anyways! 😆

Fueling up at this rest station for an uphill straight ahead!

The extra loop (aka century route; additional 21km) occurred 50KM into the ride.  No matter how much encouragement (or threat?) we gave John, he was determined to ditch us & go the regular route.  (at least we got him to reserve some burgers for us at the finish line? 😕 )  While John turned left, Luch & I continued straight ahead.  We quickly met a huge downhill…..I mean HUGE!  Praying for no potholes, we zoomed down smiling from ear-to-ear.  But immediately, we thought “we’ll be climbing up this damn hill later on” (oh well, that’s not for another 21km!).

No one was behind us.  Were we the last ones to do this century route?  As we rode onwards, we realized why not many people chose to do this……nonstop rolling hills, lose gravel at certain points, poorly maintained roads.  Crap!  Honestly if Luch wasn’t there, I wouldn’t have done this on my own!  We were getting hungry & all we cared about was “Where is that BBQ?  We are not getting close, I don’t smell it, do you?” 😀

~78km into the ride was THE best rest station of the entire tour.  They had the friendliest volunteers & the widest assortment of refreshments: peaches, grapes, orange, banana, bagel with cream cheese, trail mix (!!), water, & Gatorade.  My obsession with peaches was uncontrollable at this point.  I was hungry & darn, those peaches were so sweet!  I lost count of how many I ate…..all I remember was mumbling whenever I spoke because my mouth was stuffed with them.

As we were leaving the rest station, 2 volunteers kept chanting “there’s 9km left”.  That doesn’t make sense!  Wasn’t this route 100km ….it’s called a “Century Route”.  Century = 100!!  This was followed by us arguing whose cyclocomputer was the most accurate.  Hey, anything to pass the time!! 😀

We finally made it back to Prospect Park!!

Day 2 turned out to be 86km.  But if I recall correctly, they purposely planned out a longer distance on Day 1 & a shorter distance on Day 2 since the latter had more intense hills.  My average speed was even lower than yesterday……that’s what happens when I chat while riding.  But riding with someone is so much more fun than solo! 😀 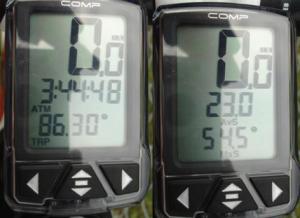 FOOD!!!!  Lunch was a BBQ, complete with hamburgers, hot dogs, fruits, & bean salad.  We got food (Sorry, no photos taken…..too hungry!!)  & immediately signed up for a free massage session (another 1 hr wait; the massage hit the spot though! 😀 )  Before I finished my burger, they brought out pizza!!!  I grabbed a slice & chowed that down too!  😀

What a fabulous weekend.  Excellent weather (despite the forecasted thunderstorms), amazing people, hardworking volunteers.  Beautifully planned.  I’m so grateful to have met the gang at Gears & Tears.  I’m so excited to join them in future bike events.  Next year, I hope to be part of their team….actually, I already signed myself up!! 😎