This morning, my brother and I headed out the door by 7AM for a drive to the starting location at Duncan McIntosh Arena, Churchill Park in Cambridge.  He registered for 100km, which starts at 8:30AM.  My route starts at 9AM.

What an amazing turnout.  We parked our cars, checked in, got our maps & coffees, & waited for the start.  I, unfortunately, did not get a complimentary tech shirt because I wasn’t the first 1000 people to sign up.  I only registered last week after Ride for Heart when I realized I could cycle with my injury!

The moment is here!  As 9AM approached, the 72km-ers listened to a short speech about road safety.  This bike tour is on public roads with no road closures.  We must abide by traffic laws so we can stay safe & don’t piss off any drivers!  You know how grumpy they can be. 😉

We’re off!!  My Sitz bones have recovered from last Sunday’s Ride for Heart!!  Riding conditions – chilly and VERY windy!  Thank goodness I had a jacket & some leg warmers!  We were riding on country roads with minimal car traffic.  However, country roads bring rolling hills!  We had to conquer some nasty hills, coupled with headwind & let’s not forget…….the waft of manure from many farms along the way.  As I climbed up the hills, huffing & puffing, that smell was all I needed :P.  What goes up, must go down.  There were some amazing downhills.  The wind was so strong I had to hang on to keep my bike in control!

There were 2 rest stations in this route.  The first stop was at ~32km into the ride.  I haven’t mastered biking with one hand yet.  If I drank my water while riding, I would lose my balance & crash into a tree.  The other option was to stop on the side of the road & drink my water.  I didn’t feel like doing that.  So 1hr32min later, I took my 1st sip of water since the starting line.  It felt great!

This rest station offered refreshments: bananas, cookies, water.  Not to mention 2 stinky yet much needed potties. 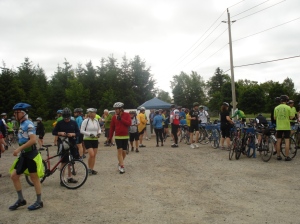 This rest station claimed to have a spa.  Where is it???  I could use a massage!  Oh well! 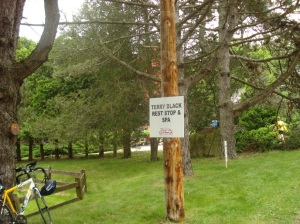 My legs are still feeling strong; my Sitz bones are as tough as ever! 😀  I’m not sure why they aren’t hurting as much as last Sunday.  It can’t be due to stronger muscles; I didn’t even do any training after last week!!  Maybe the padding on my bike shorts fits me better?!  HOMESTRETCH!!  I only have about 13km to go!  Let’s do this!  Left turn ahead!

That last stretch of the ride finished before I knew it.  The final distance was only ~68km.  I felt a bit cheated; they didn’t map out this route properly.  I had more fuel left in me & wanted to ride more!  Where’s my remaining 4km??  Oh well, I digress.  I was taken aback by my maximum speed though…..a whopping 56.3km/hr!!  When did that happen?  😀

It’s time for lunch! It was set up in the arena.  Tons of people were already there lining up! 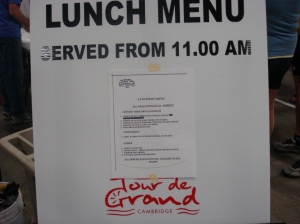 Look how cute this is!  It may be a simple lunch.  But don’t forget, this whole ride is organized by volunteers.  I’m so grateful for these volunteers who came here at the crack of dawn to set everything up for us.  Without their time & generosity, this ride wouldn’t have ran so smoothly & be so inexpensive – only $18.  So thank you for all those who volunteered.  This lunch was amazing!  I had a whole wheat bun with a slice of turkey, lettuce, tomato, & cucumber; a slice of apple; gingerbread cookie (YUM!); hummus; mustard; and coffee! 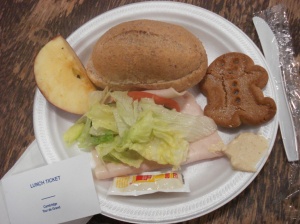 I had a lot of fun today!  Windy, yes, but everything went smoothly!  All the signs & arrows along the route were nicely setup; I never once consulted my map.  I was amazed by the amount of police escorts at busy intersections!  I give them a round of applause! 😀

The only thing I would suggest for them next year is to measure those distances more accurately!!  I wasn’t the only one who felt a bit cheated.  There were a couple of 72km-ers who said the same things!  Knowing this minor flaw, I’ll probably sign up for 100km next year.  I really didn’t get enough today!!